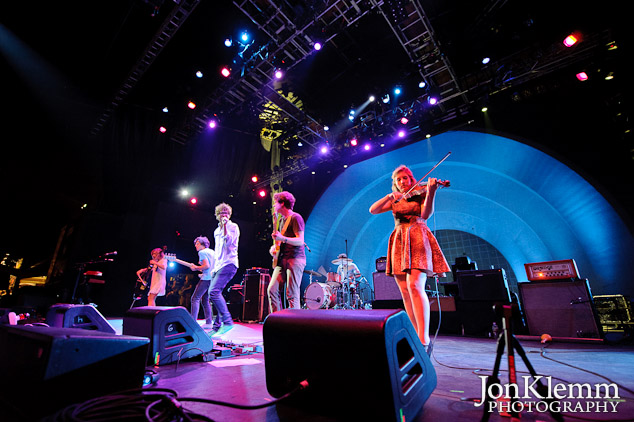 Ra Ra Riot played a free show on Friday night as Celebrate Brooklyn entered the last week of its 2011 summer concert season.While the band originally formed in Syracuse, they are now based in Brooklyn. Singer Wes Miles mentioned that he lives only seven blocks from the Prospect Park venue. He also commented that the concert was the biggest headlining show, as well as the longest set, that they have played. The set list included most songs from their two full length albums (2008’s The Rhumb Line and 2010’s The Orchard), as well as two covers.

I am a fan of Ra Ra Riot’s original material, especially their first album, but one particularly memorable song from the show was a cover of Steve Winwood’s Valerie, which they played during their encore. They were joined on stage by Steve Marion, aka Delicate Steve, a guitarist whose band was an opening act.

Here is a link to a full gallery of photos from Ra Ra Riot at Celebrate Brooklyn.