Farewell to the Siren Music Festival 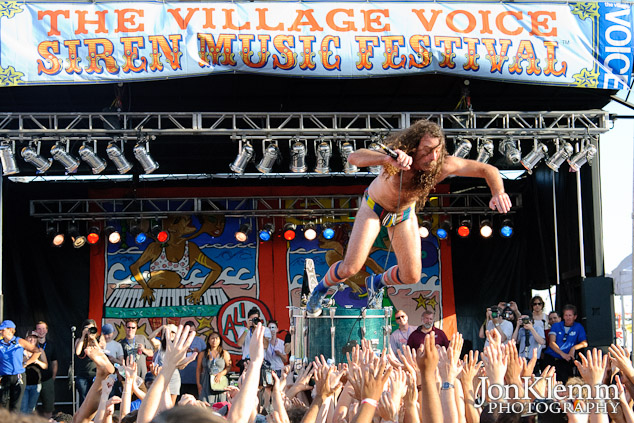 The Village Voice’s Siren Music Festival marked a major milestone last year when it hit its tenth anniversary of bringing live music to Coney Island. With two stages, each year featured fourteen bands, mostly from the indie rock or experimental genres. While the festival featured some well-known headliners, it also showcased many up-and-coming bands and was a great opportunity to be exposed to new music.

The Siren Festival will always hold a special place in my heart because the 2008 festival was the first music event that I photographed with an official press pass. It was really the start of everything you see on this website. For the past three summers, it was a tradition for me to make the annual subway ride out to Coney Island for the festival. Siren always seemed to take place on the hottest day of the year, and it was an exhausting day in the sun, but I always enjoyed it.

Two of my favorite moments from the three festivals that I attended were Monotonix playing in (and on) the crowd in 2009, as shown above, and Matt and Kim’s photogenic performance in 2010. (Full Matt and Kim gallery here.)

This Saturday would have been the 11th annual Siren Festival. In its place, The Village Voice is now putting on the 4Knots Music Festival, which will be held at the South Street Seaport in downtown Manhattan. I am hopeful that the 4Knots Festival will carry on the legacy of the Siren Festival…and maybe provide a little more shade.

To see a full gallery of my favorite photos from the last three years of the Siren Festival click here.

For more information on the 4 Knots Music Festival, you can visit their website.